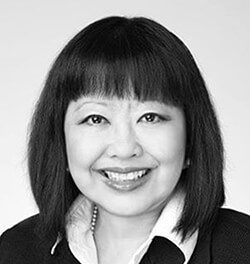 Judge Eileen A. Kato was appointed to the King County District Court (Seattle) in June of 1994, and recently retired from the bench in March of 2016. She is a graduate of University of Santa Clara School of Law. Judge Kato currently serves on the Board of Governors for the American Bar Association, as a consultant to the National Center for State Courts, as a faculty member of the National Judicial College, as an executive committee member of the International Organization for Judicial Training, and as a volunteer for the King County Bar Association Neighborhood Legal Clinic. She has also served as a board member for the National Center for State Courts, Justice at Stake, President of the Washington State District and Municipal Court Judges Association (DMCJA), Chair of the DMCJA Education Committee, Chair of the DMCJA DUI Regional Education Programs, President of the National Asian Pacific American Bar Association Judicial Council, ABA Justice Kennedy Commission on Sentencing, ABA Judges' Journal Editorial Board and Chair of the ABA Judicial Division Conference of Specialized Court Judges. Judge Kato is a frequent speaker and presenter at local, national and international conferences and forums.